Water has so many properties and functions which we take for granted. Ben thought of using a tomato cannery as an example to look at all the different ways water is used in the process.

Tomatoes are harvested into two big gondolas, one on each trailer. This goes back to the late sixties before tomatoes ever could be harvested into larger containers than a crate without getting all crushed. Especially the University of California - Davis (UCD) was very involved with developing varieties that would provide firmer fruit and could be harvested all at one time, instead of the time-proven method of being harvested in stages. Neither could they be plants that needed to be trellised. Ben got into the industry in 1969. By then Jack Hanna was very well known at the University and in the industry. California grows about 95% of canning tomatoes, so his research and development of varieties were mostly geared for California. New harvesters had to be developed which also was heavily researched by the UCD mechanical department.
Ben’s father and mother came over that summer of 1969, so Ben took his dad to the fields. Being an avid photographer, his dad had his film camera with him. Yamamoto, one of the farmers Ben had contracted with, was suspicious and asked who this person was, filming during the harvest. Mechanical harvesters were still in the development stages, so it might well have been a competitor trying to take pictures of Yamamoto’s harvester. Ben assured Yamamoto that it was his father who wanted to take pictures to show in Holland. At that time tomatoes were harvested into bins which were then loaded onto a flatbed, two rows by 6 bins long. 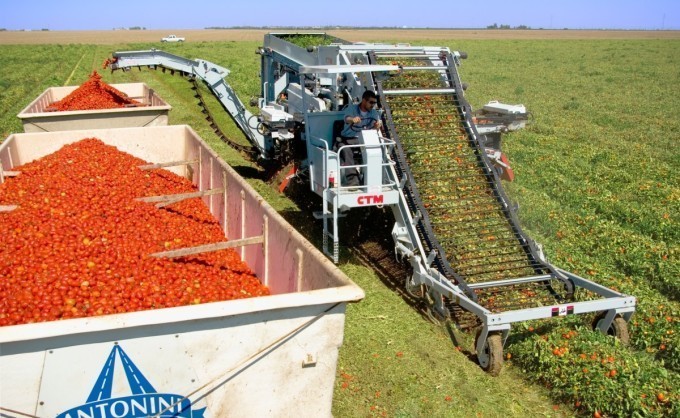 In the 1980’s, canning-tomato varieties had been further developed and gondolas were tied onto a flatbed and pulled alongside the harvester. There were about 5-6 people on each side of the harvester, to take out green , over-ripe, and blemished, tomatoes, along with any vines that came up with the tomatoes. A truck towed two of those trailers to the cannery where they are staged. The cannery has a few tractors to take the trailers along a channel filled with water. The water is circulated in that channel, or flume. The trailers are pulled onto a tilted pad. They have a little gate on either side, which is opened and a hose of water is used to flush out the tomatoes into the flume. 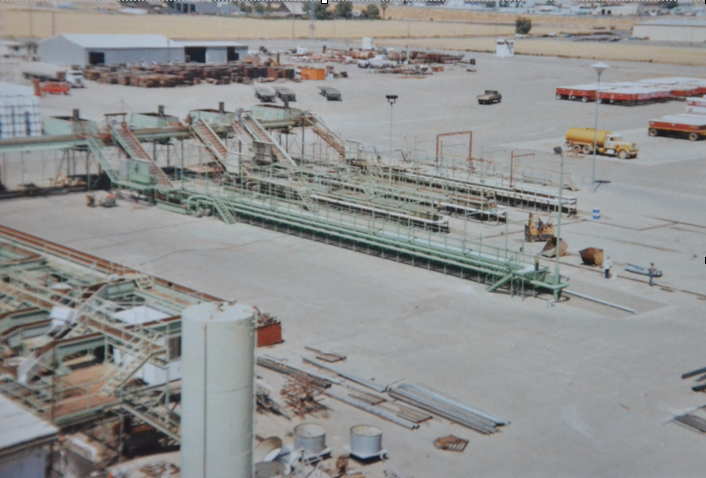 Once the tomatoes are crushed, pectin breakdown sets in, what we want to avoid because the pectin is important to maintain thickness of puree and tomato paste. Especially for puree it is very important to maintain a thick consistency, because that is how quality is measured. To avoid the breakdown, crushed tomato needs to be heated right away. The crushed tomato falls into a tank from which the juice is circulated through tubes surrounded by steam. Where doe the steam come from?
Tomatoes consist for 95% out of water. To make tomato puree and paste, the 5% solids of a tomato is concentrated to 12.5% or 24% solids.

The tomato paste is sterile enough, but the can it is put in, is not. The paste would soon spoil.

CAN YOU THINK OF MORE WAYS WATER IS USED?