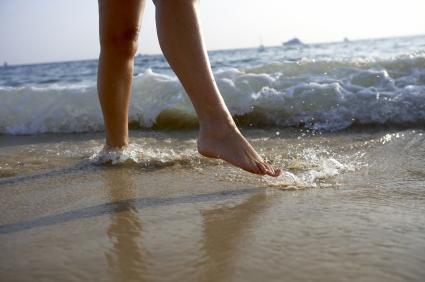 We all know the story of Joshua leading the Israelites into the promised land, but were stopped at the turbulent Jordan River. God promised for them to make it into the promised land and commanded Joshua to step into the river. Just imagine: Joshua and some others stuck their toes into the water. Nothing happened. Then they went ankle deep. Still nothing happened. They got to their waist and could not really go further without the risk of being swept away. Then the water started to build upstream, so they kept on walking. By now the rest of the Israelites were probably reluctantly following, as the water dammed up all the way.

What is your next step ... to put your toe in the water?

Here are a few paragraphs:

He was just cleaning up the milk buckets, adding some hay to the feed trough, looking out over the flat landscape of Missouri. His father’s dairy farm was a challenge, but Theo learned a lot! His dad was not the easiest person, demanding a good job be done. Every day it became routine to milk the cows twice a day, feed them, or send them out to pasture in the spring and summer.  Next, get ready for school, saddle his horse or get the buggy ready if he had to take his brothers and sisters as well. Mom would have a hearty breakfast ready and then it was off to school.
Would Theo be looking over those fields for the rest of his life? There was plenty to do and he would be very capable of taking over from his dad, should the time come. Maybe his dad even expected it?  Owen, the neighbor boy, who was about as old, was clearly expected to take over the farm, but Theo’s dad kind of left it up to him. Did he secretly hope Theo to take over? Caleb, the next one down probably never would, but then there’s Emmett who might.
“Hey Theo, you’re ready?” Emmett would holler across the barn shaking Theo back to reality. It was a nice Missouri spring day, so getting to school shouldn’t be a big deal. Mom had the eggs ready with the ham from the hog they had butchered about a week ago. Hattie had made some nice bread the day before, and there was plenty of strawberry jam yet from last summer. It could be tough living in Missouri, but life was pretty good on the farm, Theo thought.
This day Theo took the buggy. All of the McDermott kids would go together. Theo put the horse to the buggy and off they went. It was about a ½ hour ride to town, first down their driveway, then following a hard packed sandy road. It was wide enough for oncoming traffic to pass and there was a walking path along the road as well.
views