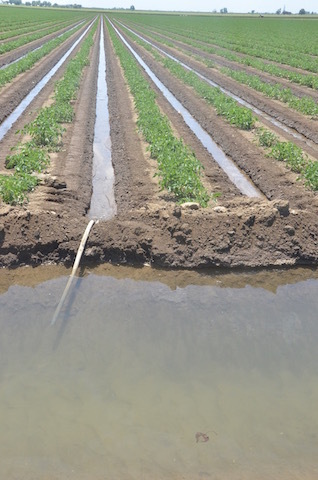 Ben drove up, and saw Theo inspecting his tomato field. It was the second planting, which they had just been finished thinning, and about ready of another irrigation. The plants were big enough now, to where Theo did not sprinkle anymore, but ran water in every other grove between the beds. It was the end of March and they had just a sprinkle of rain, which did not amount to anything.

“Well,” said Theo, “global warming is making itself known; we didn’t have much rain this season.”

“Really,” Ben replied, “and what is the definition of global warming?”

“That includes a lot of things. The way the ice caps are melting, sea levels are slightly but continuously rising, and what we humans add to the equation from our pollution, like CO2 and other greenhouse gasses.”

“Oh,” Ben replied, “you mean the melting of the ice caps and current increase of the oceans is due to us polluting?”

“Oh yea, that is based on computer models in which the more recent and more sophisticated data is extrapolated over hundreds or even thousands of years prior! I’m not saying that global warming is not taking place. The Dutch are very aware of it as they see the sea level inching up and the below-sea-level ground sinking, just as is happening in the Central Valley. They are getting scared of having to raise the dikes all the way around,” Ben responded all in one breath. He went on: “here in the USA, global warming, also called climate change, I believe, is so heavily impregnated with CO2 expulsion created by carbon discharge of the use of carbon fuels and greenhouse gasses, emitted by humans. If we control all of that better, that would reduce global warming and the Dutch would not have to worry so much about having to raise the dikes.”

“So,” Theo replied:  “is it not better to reduce our pollution?”

“Of course we should control our pollution, but not with the expectation global warming will be controlled,” Ben replied, and went on: “We are sterilizing the earth, reducing the bee population, redirecting water, so Los Angeles can grow bigger, and much natural life gets killed off. For the most part we currently don’t even know we are doing that. Aren’t we learning anything from history?”

Ben went on to explain that “global warming,” in Holland and much of Europe has an entirely different meaning than in the USA. “In Europe, global warming is seen much more like a long-term process from ice-age to ice-age, which takes place over a much longer period than from the time the first automobile was produced until now. I’ve seen Los Angeles with brown polluted skies during the 1970’s-1990’s. But that has to change through stricter car and industry air pollution legislation. Of course we need to control pollution better, but that is an entirely different story than global warming.”

“Got to go, we’ll continue this conversation later,” said Theo as he got in his pickup to go and prepare for the next irrigation.