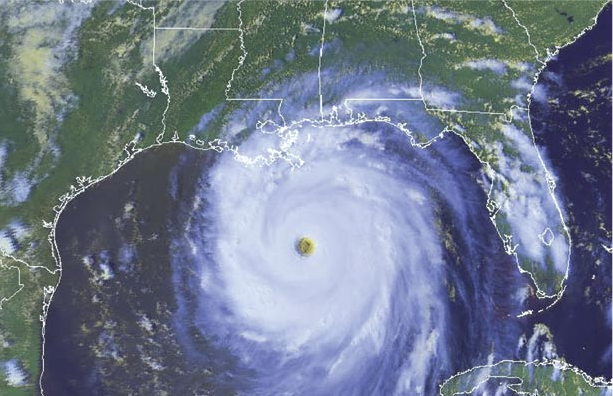 A Dutch engineer visited New Orleans on a vacation. Being involved with water projects in Holland and Israel, he was curious how people in and around New Orleans had dealt with “hurricane Katrina” and the consequences.

Early in the morning on August 29, 2005, Hurricane Katrina struck the Gulf Coast of the United States. When the storm made landfall, it had a Category 3 rating on the Saffir-Simpson Hurricane Scale–it brought sustained winds of 100–140 miles per hour–and stretched some 400 miles across. The storm itself did a great deal of damage, but its aftermath was catastrophic. Levee breaches led to massive flooding, and many people charged that the federal government was slow to meet the needs of the people affected by the storm. Hundreds of thousands of people in Louisiana, Mississippi and Alabama were displaced from their homes, and experts estimate that Katrina caused more than $100 billion in damage.
New Orleans was at particular risk. Though about half the city actually lies above sea level, its average elevation is about six feet below sea level–and it is completely surrounded by water. Over the course of the 20th century, the Army Corps of Engineers had built a system of levees and seawalls to keep the city from flooding. The levees along the Mississippi River were strong and sturdy, but the ones built to hold back Lake Pontchartrain, Lake Borgne and the waterlogged swamps and marshes to the city’s east and west were much less reliable. Even before the storm, officials worried that those levees, jerry-built atop sandy, porous, erodible soil, might not withstand a massive storm surge. Neighborhoods that sat below sea level, many of which housed the city’s poorest and most vulnerable people, were at great risk of flooding.  (from: HISTORY article, "New Orleans after 10 years.")
The Dutch engineer traveled the area, observing the dikes, dams, and water management projects in the area. He noticed that a lot of the damage could have been prevented, and a bit of his Dutch pride about how water management is handled different in Holland, kicked in. After all, Holland was also a delta of the Rhine and Maas rivers! He wondered why a lot of houses were built in marginally protected areas of the delta. He wondered if technology about water management was more advanced in Holland.

Our Dutch engineer became more interested in the “why’s” of flooding, because he realized that American and Dutch technologically about water management were not that different. Engineers in both countries have a good idea of the conditions and risks that exist at any time. Didn’t they manage to not have such a high density populated, or expensive businesses, in flood prone areas in Holland? He would try to find that out after his return to Holland, from vacation.

DO YOU THINK THAT MUCH OF THE DAMAGE FROM HURRICANE KATRINA COULD HAVE BEEN BETTER CONTAINED?