Economics has fascinated me for some time. I even started a blog on it, until I came to the conclusion that there are hundreds of blogs about economics. I started to focus more on "water", driven by the drought I encountered, upon return to California in 2009. But just writing about the drought, or "water" in California was also a subject that was overdone, and only of interest to Californians. Other states in the country heard about the drought, but could not grasp its intensity. Even in California people felt it was not that bad and could be legislated out of existence, if the government would get their act together. 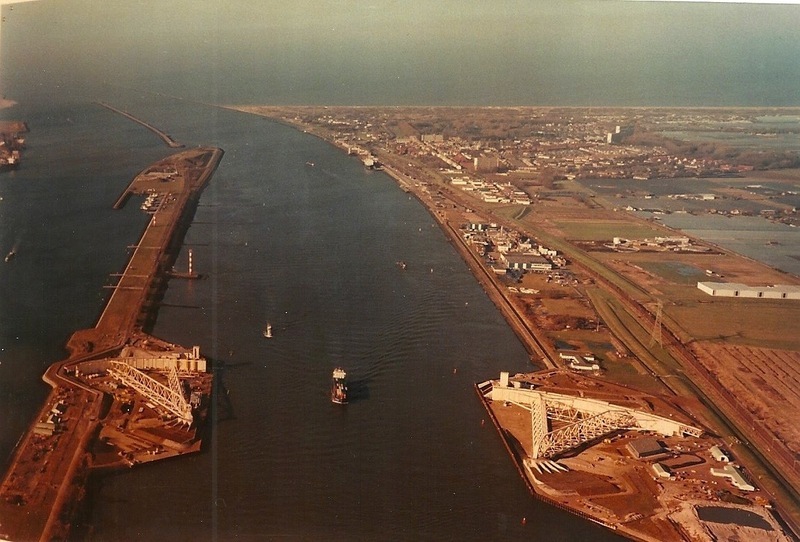 The waterway from the harbor of Rotterdam to the North Sea. Rotterdam used to be world's largest port for many years.

I like the big picture, so decided to incorporate economics, politics, geography, history, and culture into the equation. But to what could I compare it? The first thing that came to mind was how water is managed in Holland (the Netherlands). First there was the Afsluitdijk, a dike built across the Zuider Sea in 1932, making it a lake. Then we had the big flood in 1953 and how after that plans were solidified more quickly to protect the country from it happening again. Then there was hurricane Katrina in the Mississippi delta in 2005, just as Holland is a delta. My brother, who was a water engineer, put projects together in Bangladesh, which is a humongous delta where the snow melt from the Himalayas streams into the ocean.

So here is how my story is developing now:

Theo migrated to Missouri with his family. His dad started a dairy farm in the early to mid 1800's. Theo is the oldest son who would be expected to take over the farm, but is not so inclined. He will move to California, following the gold-rush crowd. Not so much to dig for gold, but to get involved in the politics of water management. His grandson will meet Ben, who immigrated from Holland with his new bride. Ben is also interested in water and the two get together to share notes about water management in California vs. Holland. Ben's brother, Rudolf, visits his brother in California, but is also interested in the ramifications of hurricane Katrina, being a water engineer himself and having worked on rebuilding the dike systems in Holland after the 1953 flood. His company sent him out to Bangladesh to engineer water projects there. He also was sent out to Israel to maintain and raise the levees around the Dead Sea for potassium winning.

Fascination comes into play, to see how different politics plays out in each of those developments, and how the geography and economics play a role in each. It will become a novel for which I need to develop personal challenges for my characters, yet.

WHAT IS YOUR DREAM? HOW ARE YOU DEVELOPING THAT DREAM?

TO GET STARTED, YOU NEED TO MOVE INTO ACTION FIRST. HAVING WRITTEN SEVERAL BLOGS AND POTENTIAL CHAPTERS GOT ME TO THIS POINT. MAYBE FOR YOU IT ISN'T WRITING BUT SOMETHING ENTIRELY DIFFERENT, YET THE PROCESS IS THE SAME.

Move into action. The note-taking, list making, and research has to end at some point. Your plot comes one of two ways: from outlining or from diving directly into the writing and engaging in a process of discovery. Either way, you’ve got to start getting words onto the page.

Are you an Outliner or a Pantser?

You know what an Outliner is. Pantsers are the opposite. They write by the seat of their pants, by process of discovery. Like Stephen King, they try to put interesting characters in difficult situations and write to find out what happens.

Let the fun begin with whichever style fits you best. It may take some experimenting, but most novelists are one or the other. Neither is right or wrong, and whichever one you are, at times the other seems preferable. But pick one and run with it.

Outliners carefully map out the story before they write the first word, sometimes even developing a detailed plan for each scene. They find they can’t write a novel any other way.

Dostoyevsky wrote eight outlines of The Idiot, changing his conception of the story dramatically each time. Henry James wrote detailed scenarios of his novels before he began his first drafts; his scenario for The Ambassadors ran 20,000 words.

Pantsers believe that if they can be surprised, delighted, disappointed, horrified, or moved in the course of writing, the reader will be too. I happen to be a Pantser. author: Jerry Jenkins

I have referred to "Outliners" and "Pantsers" before. The above quote is from Jerry Jenkins Fiction Jumpstart course.

These are the basic two forms a writer uses, depending on his / her personality. I think I am also a "Pantser". My characters develop as I write, and as I "need" them to make a flowing story. Theo's personality comes from the Dutch book Soldaat van Oranje's main character. When I wrote my first book, my memoirs, I used more of an outline writing it in chronological order.

Let me ask you again:

WHAT IS YOUR DREAM? WHERE ARE YOU WITH YOUR RESEARCH ON MAKING IT HAPPEN?