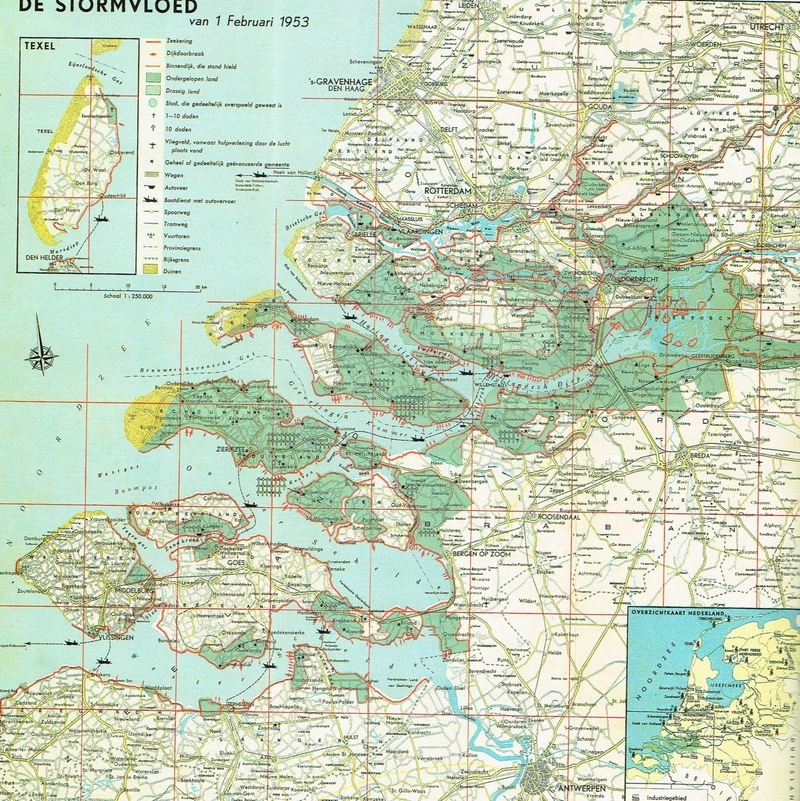 Interesting how certain dates or weather patterns will trigger our minds towards the same subject. For example: 9/11 is all I need to say and everyone will know what I’m talking about. Or Katrina, and you all will know I’m talking about the 2005 flood in New Orleans.

1953 is another such trigger, but not for Americans. After Roland had been on vacation in New Orleans and kind of cynically concluded that much of the flooding could either have been contained or construction of subdivisions should not have taken place in certain areas in the first place, he was wondering how the flood in Holland, in 1953 could have been better contained. In other words, Roland kind of presumed that the Dutch were much better at containing the water threats than the Americans. He started with 1953, a date to which every Dutchman can relate, either from experience or the history books in school if he or she did not exist yet in 1953.
Roland himself was about eight years old when that flood on February 1, 1953 took place, but he did not live in Holland at that time. His family had just moved to Venezuela, where his dad was assigned to help direct making Heineken beer. When his family heard about the flood, it was dramatic, but Roland could not exactly visualize it.
After returning to Holland where Roland finished high school and got his engineering degree in water management, specifically about dam construction, he got a better idea about that fateful February 1, 1953 flood. After his vacation to New Orleans recently, he realized that he could relate much better to the 1953 flood, because it was in the country where he was born and raised part of his life; maybe a bit prejudiced?
New Orleans is also at the mouth of a delta, the Mississippi, just as most of Holland forms the delta of the Rhine and Maas rivers. Roland knew the history of this Dutch delta from his school days. That history goes back to the 1200’s. Since then, documentation about water management had become pretty good. The urgency to maintain control of water is much higher in Holland than around the Mississippi river, because without the dikes and dunes 50% of the country would be under water. Amsterdam would not even exist. Rotterdam would never have been the largest harbor in the world between 1964-2004. About 65% of the Dutch population lives in that below-sea-level area of the country.
Much of the flooded area from Katrina was inhabited for a large part by the poorer black population and only involved a small % of the state. Roland realized that floods were not just a matter of engineering to prevent or manage them, but included political, historical, economic, and cultural issues as well.